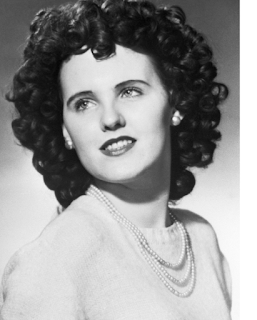 Elizabeth Short was twenty-two-year-old when found brutally murdered on January 15, 1947.
She was severed at the waist and left naked in a vacant lot in the Los Angeles area. The newspapers nicknamed her the “Black Dahlia” after a film noir murder mystery,The Black Dahlia, which was released nine months prior to her murder.
The Los Angeles Police Department proceeded with a deep and lengthy investigation into Elizabeth Short’s death. After shifting through a list of hundreds of suspects, many false reports and witnesses, and several false murder confessions, the police struggled to make progress in the murder case. The murder case became one of Los Angeles’s most infamous cases, and the case still remains unsolved almost seventy two years later.
On January 21, 1947, a person claiming to be Short’s killer placed a phone call to the office of James Richardson, the editor of the Examiner, congratulating Richardson on the newspaper’s coverage of the case, and stated he planned on eventually turning himself in, but not before allowing police to pursue him further. Additionally, the caller told Richardson to “expect some souvenirs of Beth Short in the mail”.On January 24, a suspicious manila envelope was discovered by a U.S postal service worker: The envelope had been addressed to “The Los Angeles Examiner and other Los Angeles papers” with individual words that had been cut-and-pasted from newspaper clippings; additionally, a large message on the face of the envelope read: “Here is Dahlia’s belongings –
The envelope contained Elizabeth Short’s birth certificate, business card, photographs, names written on pieces of paper, and an address book with the name Mark Hansen embossed on the cover. The packet had been carefully cleaned with gasoline similarly to Short’s body, which led police to suspect the packet had been sent directly by her killer. Despite the efforts to clean the packet, several partial fingerprints were lifted from the envelope and sent to the FBI for testing; however, the prints were compromised in transit and thus could not be properly analyzed. The same day the packet was received by the Examiner, a handbag and a black suede shoe were reported to have been seen on top of a garbage can in an alley a short distance from Norton Avenue, 2 miles (3.2 km) from where Short’s body had been discovered. The items were recovered by police, but they had also been wiped clean with gasoline, destroying any fingerprints. Over five hundred people confessd to the crime.
Police came to consider George Hill Hodel jr a suspect after the 1947 murder of Elizabeth Short. He was never formally charged with the crime, and came to wider attention as a suspect after his death when he was accused by his son, Los Angeles homicide detective Steve Hodel, of killing Short and committing several additional murders.
Prior to the Dahlia case, he was also a suspect in the death of his secretary, Ruth Spaulding, but was not charged; and was accused of raping his own daughter, Tamar, but acquitted. He fled the country several times, and spent 1950 to 1990 in the Philippines.
Share
Facebook Twitter Pinterest Linkedin